Currently some famous brands for the Virtual Reality headset market includes the Taiwanese brand HTC or the one from the USA Oculus Rift. However, a young Chinese enterprise DeePoon also worthy our attention if we compared a series of technological figures. Here we gonna compare DeePoon M2 model, HTC Vive and Oculus Rift.

We focus our comparison on five parts: connectivity, design, screen display, system performance and VR features. All these three brands have very close strength for the connectivity part, so it’s not surprised to hear HDMI, USB 3.0 and bluetooth 4.0 connection are available for DeePoon M2, HTC Vive and Oculus Rift. For product dimension DeePoon M2 and HTC Vive have nearly equal sizes, while Oculus Rift has the largest scale. However, DeePoon M2 has the lightest weight with no more than 400g.

If you checked with the screen technology for your VR, you should pay attention to those AMOLED ones rather than the old OLED versions. The full name of AMOLED is : active-matrix organic light-emitting diode. It is a display tech. that originally used in smart electronics like laptops etc. Since the year 2008 AMOLED has been used in smartphones, and in the year 2016 it becomes new to VR headset. Compared with OLED version, AMOLED can operate with lower power in bigger size display.

The FPS figure measures the operating speed of graphic units of VR system, and the field of view is a kind of measurement that similar to shooting view for sports action cameras. Hence more wide the view angle, more views you could see on your VR screen. DeePoon M2 consider different size of human faces, so its interpupillary distance covers from 54mm to 74mm, even more wide than Oculus Rift. Mail GPU is currently leading the GPU technology for VR headset. Oculus brand announced that its Rift mode VR headset has more than 30 system-storage games, but it is still far less than HTC Vive and DeePoon M2’s 100 games options.

You could see tech. details for these three brands below.

***Reminder*** Each from can be enlarged by double clicks. 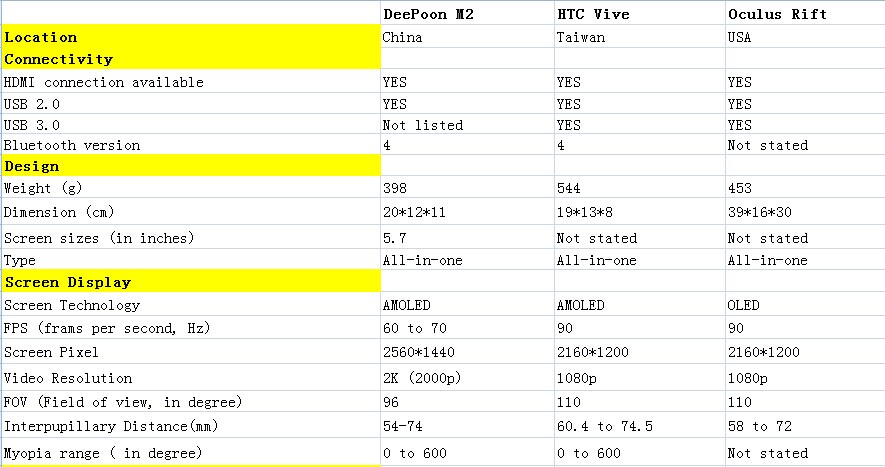 So overall if we considered all those five parts and their official selling prices, we could found all these three brands have very close strengths, and DeePoon M2 just a few dollars expensive than Oculus Rift VR headset, whereas the HTC Vive has the highest price among these three brands. If you got bored with HTC Vive or Oculus and wanna try something new, just give a shoot for DeePoon M2.

For more about the DeePoon Giveaway deal & Win Chance you could click here: DeePoon M2 COUPON